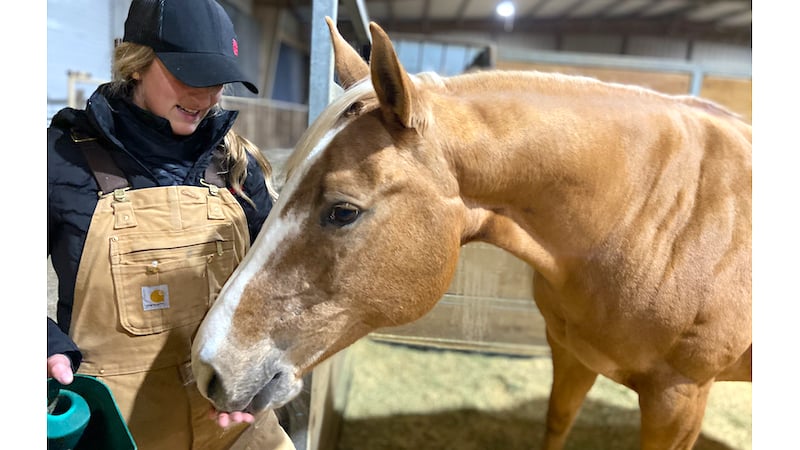 In just four short years, Wimpys Little Chic amassed more than a half a million dollars in earnings while competing in the National Reining Horse Association (NRHA).  She’s the only horse in history to win the NRHA Futurity, NRHA Derby, and the National Reining Breeders Classic (NRBC) consecutively. Now, Wimpys Little Chic is officially the newest NRHA Million Dollar Dam.

She’s one of only five mares to reach that status, joining Ebony Shines, Dun It For Chex, Snip O Gun and Princess In Diamonds in the elite club. And, she’s the only mare to ever foal three NRHA Futurity Open champions.

The stunning palomino was bred by Monica Watson of Double Run Farm of Leland, North Carolina. Eleuterio Arcese, of Arcese Quarter Horses USA, purchased the mare in 2007. She resides at Oswood Stallion Station in Weatherford, Texas.

“In the early spring of that year, we went with our friend Frank Costantini to Shawn Flarida’s to see some 3-year-old futurity prospects. Among all the prospects we looked at, when we saw her, we realized she was really special and unique,” Arcese recalled in a statement issued by the NRHA.

The special mare, now 17 years old, is by Equi-Stat Elite $12 Million Sire Wimpys Little Step and out of Collena Chic Olena (by Smart Chic Olena). She had magnetism in the show pen, drawing spectators to the rails when it was time for her to compete.

“She had a great brain, and when that mind mixed with the incredible athletic ability she had, greatness happened,” Flarida said.

While Flarida’s ridden many incredible horses in his career, which resulted in earnings of more than $6.8 million, he told the NRHA he believes Wimpys Little Chic towers above the rest.

“She’s absolutely the greatest,” he said. “She’s the one who will change this sport, if she hasn’t already.”

Now it’s clear that her foals have that same commanding presence. When Equi-Stat Elite $6 Million Rider Andrea Fappani and All Bettss Are Off,  the mare’s son by Colonels Smoking Gun (Gunner), won the 2020 NRHA Futurity Level 4 Open Championship for owner-breeder Arcese, Wimpys Little Chic became the fourth, and latest, mare to join the elite club of Million Dollar Dams with only 12 money-earning foals.

“This meant a lot to me because Mr. Arcese asked me at the beginning of the year if I thought I had the quality of horse I needed to win the Futurity,” Fappani said. “He knew that Wimpys Little Chic was getting close to that big mark, and it would mean a lot to him to win the Futurity and put that mare over one million. Being able to do that for him was a big deal to me.”

In a career that includes many great horses and achievements, this most recent one is special. “It’s great, it’s a dream come true. It means all the effort, the commitment, and the passion dedicated to our program is now repaying us with great satisfaction,” Arcese said. “This is the third Open Futurity won by horses we raised out of Wimpys Little Chic, and they’ve also won at the NRHA Derby and had many reserve championships.”

The mare’s second-highest money earner is her latest Futurity champion, All Betts Are Off, who now has $281,311 in NRHA LTE, thanks in part to the record-setting $250,000 Futurity check.

Daughter Shesouttayourleague (by Walla Walla Whiz) rounds out the top three earners with $252,470 in NRHA LTE, including championships at the NRHA Futurity, Derby, and High Roller Reining Classic. Shesouttayourleague, owned by Curtis Performance Horses LLC, was ridden by Casey Deary.

“I’ve ridden some of her babies, and she stamps them. She could stop like crazy, and every single one of her foals can stop, too,” Flarida said. “She’s already produced three Futurity champions, but the point is, she’s a great horse. You can use a lot of words, but she is the one who just makes you sit there and ask, ‘Wow, how did she do that?’ Now, she’s continuing to produce great horse after great horse.”